It’s Christmas time again. Santa has been busy filling up his sack with gifts, getting drunk on glögg and rolling around nude in the snow. Me, I’ve been busy baking, since we have no snow in Rome…

Panettone is an Italian leavened holiday pastry, something in between a cake and a sweet bread – laden with eggs, butter and candied fruit. The very special thing with Panettone is the leavening with sourdough and the very long fermentation and rising times.
During the last few weeks I’ve been struggling to find the perfect Panettone recipe – moist, not too heavy, not too sweet and with a clear christmassy aroma to it.
A Panettone should be slightly chewy, have a firm yet very airy interior and when you rip the crumb apart it comes away in strings rather than crumble. Candied fruit, raisins and vanilla are the most common flavors in a classic Panettone, but the chocolate one with chunks of dark chocolate in the dough is also very popular.
Finally after many more or less successful tries I composed a recipe that I am very happy with.
Since I did all the research and testing you won’t have to. Here’s my Christmas present to you – My Panettone recipe:

First mix 25 grams bread flour with 125 grams of cold water in a pot¨making sure there are no lumps. Heat the flour and water slowly on the stove, stirring constantly, until it reaches 65 degrees Celsius or 150 degrees Fahrenheit. Pour it into a bowl and cool it down over ice.

170 grams milk
120 grams of the cold cooked flour-water mix
280 grams of egg yolk (about 18-20 egg yolks depending on size)
700 grams of strong bread flour with high protein content
180 grams of ripe firm sourdough (very important that it is ripe and has been fed on a correct schedule over the last few days)
280 grams caster sugar
80 grams honey
1 vanilla pod, scraped and seeds mixed in the sugar
5 grams of ground spice mix (I use a mix of black pepper, green pepper, Sichuan pepper, allspice, cloves and nutmeg)
360 grams of lightly salted butter, cubed
200 grams of raisins, soaked in a little bit of rum
200 grams candied fruit peels (orange, cedro, mandarin)
30 grams of whisky (you could also use rum)
Grated peel of half a lemon and one mandarin orange

Keep all your ingredients cold before you start mixing. I even put the flour and sugar in the fridge because the long mixing time generates a lot of heat and we don’t want the dough to get too hot.
In a kitchen mixer, combine flour, sourdough, the flour-water mix, half of the sugar, milk and 3 egg yolks. Mix with the dough hook on low speed for a couple of minutes until the ingredients have been mixed and the dough has just come together. Wrap the dough in cling film and put it in the fridge for 30 minutes.
Put the dough back in the mixer and start mixing on low speed again and watch how the dough gets a smoother appearance. Switch to medium speed and start adding, little by little, the remaining egg yolks, sugar, honey, spice mix and fresh citrus peels.
It is important to check the temperature of the dough while mixing, and not let it rise above 25 degrees Celsius or 77 degrees Fahrenheit. If the dough gets too hot, stop mixing and put the mixing bowl and covered dough in the fridge for a while until it cools down, then resume mixing. When these ingredients have been incorporated the dough should be very smooth and soft. On medium speed we now start mixing in the cold butter, little by little, and add the whisky slowly. Once finished the dough should be slightly shiny, very elastic and be able to stretch into a very thin translucent membrane, the “windowpane test”. Do check the dough temperature often to make sure it stays somewhere around 25 degrees Celsius or 77 degrees Fahrenheit.
At this stage we add the candied fruit peels and raisins to the dough and mix on low speed just enough to distribute the ingredients in the dough.
Put the dough in a transparent container, plastic or glass and cover it with cling film, this makes it easy to monitor its rise. Let it rise in warm room temperature, about 27-28 degrees Celsius (80-82 degrees Fahrenheit) for about 12 hours. The dough should rise about one and a half time its original size, that is, not really double. If the dough rises faster, we just go ahead and proceed with the next step even if 12 hours has not passed.
We then divide the dough into 2 equal parts on a floured surface. Leave it to rest covered with cling film for 30 minutes. Give each piece a round shape, just like when shaping a bread boule. Put the pieces into the special Panettone paper baking moulds. Cover with cling film and let rise in warm room temperature, 27-28 degrees Celsius (80-82 degrees Fahrenheit) for another 12 hours. Keep an eye on the dough, when it rises up almost to the height of the paper mould they are ready to bake.

Preheat the oven to 160 degrees Celsius (320 degrees Fahrenheit). If you have a baking stone for your oven your results will be even better, let it preheat in the oven. Very gently, cut a cross on the top of the dough with a razor and put a small knob of butter in the center of the cross.
Put the Panettone in the oven and bake it for 45-60 minutes until the internal temperature reaches 93 degrees Celsius (199 degrees Fahrenheit).
Remove from the oven and pierce long metal or wooden skewers straight across the panettone (including the paper mould) very near the bottom so the skewers are parallel. Hang the Panettone upside down over a large stockpot and cool completely, about 6 hours.
Wait at least one day before eating the Panettone so that the flavors have time to develop fully. It keeps great for the first 4-5 days, after that I would recommend heating it up slightly in the oven or a toaster and eat it with a sweet mascarpone spread. When it comes to choosing the ideal smoker and grill combo, you would surely find the Masterbuilt 7 in 1 Smoker and Grill a good choice. It is a 7-in-1 smoker and grill that is … END_OF_DOCUMENT_TOKEN_TO_BE_REPLACED It is easy to be overwhelmed with the long list of the options available for the best wood pellet grill. Among others, one that should be on your radar is Big Horn Wood Pellet … END_OF_DOCUMENT_TOKEN_TO_BE_REPLACED 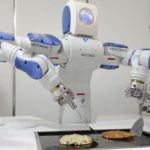 I often get the question “what type of restaurant is Noma really?”It’s a very valid question from someone who has never been there, but perhaps has heard its billing as “the … END_OF_DOCUMENT_TOKEN_TO_BE_REPLACED 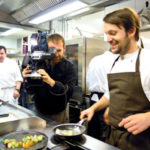 Most people are at least somewhat familiar with the great cuisines of the world – French cuisine that gives us so many of the techniques we use today, Italian cuisine with its … END_OF_DOCUMENT_TOKEN_TO_BE_REPLACED