Japan and the Japanese dropped from the sky. The archipelago of 3,000 islands and its people were created by the gods Izanagi and Izanami, according to sacred Shinto texts. The divine couple joined “their majestic parts in a majestic union” and gave birth to a new world.

In the middle of the overwhelming

heat of summer I spent three magnificent weeks of traveling around this amazing country, known for its culture, its food and its people. And all the three are basically one and the same. The culture is often about food and eating, the food is its own culture, and what people are talking and thinking about - is food.

I was stunned by the variety and quantity of food that is available on every street corner, on every floor of the buildings. Most often a quick meal is only 2 steps away.
It’s not only savory food that is readily accessible, it’s evident that the Japanese also have a special fascination with classic French patisserie. Macarons, cookies, tartelettes, petit fours, creamy cakes, croissants, eclairs, you name it. (Of course “fine-tuned” to Nipponese perfection with a pinch of green tea or red azuki beans)
And clearly this is why you get the feeling that people here eat a lot. All the time, anywhere you look, at any hour of the day, you see people chewing, nibbling, munching, snacking, it’s almost like some sort of national pastime. 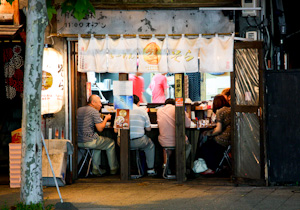 Even though I love eating in a good restaurant, spending some money on dazzling food, great service and location, I find street food the most captivating experience when traveling, this is where you really feel the soul of everyday people.
Japanese streetfood is not your common bad-for-your-health fatty processed cheap meat sans origine or high-cholesterol, trans fat spiced snacks like in many of our western countries. In Japan eating fast doesn’t automatically mean eating bad. From a street vendor you can have the most wonderful chicken skewer, which ingredients are not much more than chicken, a soy sauce based glaze and a sprinkle of toasted sesame seeds. From a hole-in-the-wall restaurant you can get a warming noodle soup with a generous topping of simmered pork, green onions, ginger, bean sprouts and sea weed. Or you could go for the classic “Onigiri” - a portion of white rice, most often pressed into a triangular shape, with a filling of tuna and mayonnaise, or fish roe, or salmon, or egg, or pickled plum, or seaweed, or shrimps, the list goes on forever.

The trip started in the tucked away north, on the island of Hokkaido. Well known for its beautiful pristine scenery, its snow-capped mountains, its friendly inhabitants and last but not least, its phenomenal seafood. Here one of the highlights was a complete sushi dinner that seemed never-ending. One delicacy after another. Sea urchin roe, scallops, king crab, hairy crab, monkfish liver, squid, salmon roe, abalone. Apart from the fact that here you will find an incredible variety of seafood, the cold sea of Hokkaido makes seafood that is packed with flavor and of supreme quality.
Hokkaido has a lot more to offer, nice small cities with a laid-back atmosphere, cute countryside dairy farms, great national parks with all sorts of wildlife, winding roads, impressive mountains and a lot of good, good food.


Next stop on the trip was Hiroshima, the city destroyed by the first atomic bomb 65 years ago. It’s nowadays a bustling metropolis, with its tragic history displayed in the Peace Memorial Museum. On the menu here was the specialities: Oysters - big ones - raw, steamed, grilled, deep fried. Okonomiyaki - something between a savory pancake and an omelette, filled to the brim with good stuff like cabbage, noodles, pork, shrimp, seafood, bean sprouts and green onions. Then topped with bonito flakes, mayonnaise and the special okonomiyaki sauce, kind of sweet barbecue sauce.

Then on to Osaka for some Takoyaki tasting frenzy - octopus balls, pieces of octopus in batter, fried in the shape of perfect balls in a special cast-iron skillet. Topped with bonito flakes, green onions, mayonnaise and takoyaki sauce.

In Nara I had a chicken-only dinner in what I feel must be the smallest restaurant in the world, not much bigger than the size of a closet, one chef, one grill, one bar counter and 8 bar stools. To get to your seat you had to squeeze in between the beer cases piled up against the wall and the other diners. The chef served up all kinds of grilled chicken parts, external and internal, claustrophobic feeling included in the menu price.

In Kyoto the obvious choice is Kaiseki - the traditional multi-course Japanese seasonal cuisine. An art form that is as much about aesthetics as it is about cooking. Other musts when in Kyoto are the excellent tofu and the yuba, a thin, glossy skin from boiling soy milk. Tokyo was a revelation foodwise, and completely blew my mind with its enormous array of points of interest for a foodie.
One great example is the Kappabashi district, a whole neighbourhood of streets lined with restaurant supply shops. Here you will find everything, and I mean everything, for your home kitchen, your restaurant or your bar. Hundreds of shops selling knives, plastic display food, restaurant signs, interior decorating, ceramics, uniforms, pots and pans, chairs, bento boxes, refrigerators, specialty kitchen gadgets, rice bowls and chopsticks…
A paradise for someone like me - now I only had to convince the airline to let me bring 200kg of kitchen equipment and ceramics on the plane back home.

Tokyo has more good eats than one could finish in a lifetime, all types of Japanese cuisine is represented here, but it’s also a melting pot for much adored foreign cuisines and Tokyo has thousands and thousands of French, Italian, Chinese and American eateries, often run by Japanese staff.
The interesting thing about the Japanese is that when they copy something they cherish, be it a concept or a recipe, they often make the end result even better than the original. Perfection is a key word here.

In the world’s biggest fish and seafood market - Tokyo’s Tsukiji - you will find everything possibly imaginable in ways of seafood and fish. From big chunks of blood red, almost black whale meat, to tiny shrimps the size of a needle, to red sea bream still bent from rigor mortis, to strange looking creatures like taken straight out of a science fiction film. Here activity starts when most people go to bed, in the late evening or early night. Fresh fish and other food products pour in from all over the world, gets sorted and packed by wholesalers for further shipment or sold at the morning market. It’s a hypnotizing experience walking around the market in the morning, observing the frenetic activity and sheer amount of seafood that changes hands here every day. This is also where the famous tuna auction takes place every morning at around 5:30 am. 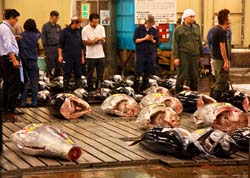 Traveling, in general, in Japan is very easy. Not because it’s easy to talk to people or ask for directions (surprisingly enough english is not a widely spoken language), but because everything works as it is supposed to. Trains run on time, bookings are respected, prices are fixed and people do whatever they can to help you, they will even go out of their way to follow you to the train station and make sure you get on the right train. The feeling of unrivaled service is a common denominator in Japan, whether you pay for it or not.

In fact traveling as a foodie in Japan is a really intense experience, and I realize while writing this, I could probably write a whole book about my 3 weeks of eating and drinking. About the noble ingredients, the extraordinary gourmet food halls of the department stores, about the izakaya’s (beer halls or equivalent to pubs) noisy crowd, about the thousands of varieties and classifications of Nihonshu, or sake as we call it. The biggest secret in the Japanese cuisine - is the cooking, or where applicable, the non-cooking.
Everything is less cooked in Japan. People are not afraid of the chicken still being slightly pink and moist in the center, or the pork meat still retaining part of its natural softness and pinkish hue and not being cooked to total stiffness and protein-white color. Another paramount difference between Japanese cuisine and its western counterparts is the unadulterated freshness and the keen emphasis on seasonality of food and from this fact comes part of the Japanese food philosophy: “Food should be enjoyed as close as possible to its natural state.”
Or as the general golden rule for us cooks says - if you are in possession of really, truly good stuff - keep it simple!

A hard thing to get used to while eating in Japan, is the relentless slurping while Japanese people eat noodles. In Europe we are always taught to not make noise while eating, but in Japan they actually find it strange not to slurp (and we’re talking LOUD slurping) while you are throwing down your Ramen noodles. Even the most posh lady with her Gucci purse and high heels won’t refrain from a bit of loud slurping while feasting upon a large bowl of soba noodle soup.

If there is one negative thing I have to say about eating in Japan it would be that it’s allowed to smoke inside the restaurants, whereas on the street you can’t smoke freely. Not a cheerful experience for a non-smoker trying to enjoy a nice meal. 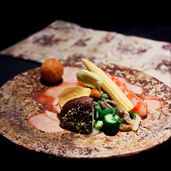 "The art of dining well is no slight art, the pleasure not a slight pleasure."