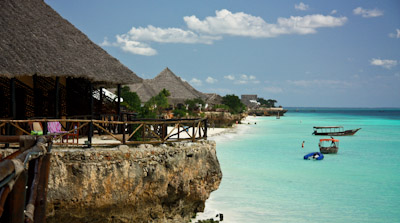 As the plane comes in for landing in Zanzibar town the most magnificent view comes into sight.
The amazing waters off the Zanzibar coast - from the deepest blue to the clearest turquoise sea one can imagine - dotted with small wooden boats. Palm-fringed white sandy beaches, and inland whole forests of coconut and banana trees. Along the water´s edge the typical african style beach huts - in contrast to the ornate colonial palaces and grand stone structures of Zanzibar town. Zanzibar. Just the name by itself evokes exotic images and sensations.
A tropical top destination for honeymooners, beach-seekers and backpackers, this island is a jewel thrown into the Indian ocean just off the east coast of Tanzania. With a romantic calm and laid back atmosphere it´s the perfect place to forget about work, stress and problems of everyday life at home.
Known for having been an important trade center for spices and slaves, its paradise beaches and coral reefs, its interesting blend of different cultures and architecture styles, and for being the birthplace of Queen´s Freddy Mercury. In the Empire game, the Portuguese and British took turns at leaving a mark on Zanzibar, but it was traders from Arabia, and in particular Oman, who had the most enduring influence on the island - not least by introducing Islam, now practised by 95 percent of the people. The population of Zanzibar today is an interesting mix of people from Africa, the Arab states, indians and europeans among others. All living side by side - most of them sharing the same religion.

In the 19th century Zanzibar rose as the center of a vast and rich empire, based on trade in spices and slaves. For the Omanis Zanzibar had an excellent position for trade in the Indian ocean. One can imagine the traffic of ships loaded with ivory tusks, spices and slaves in the Zanzibar ports in its heyday. 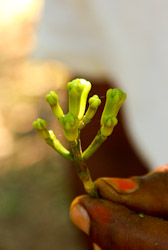 The single most important export was cloves. The demand for cloves, was during a short but intense period extremely high and allowed for making huge profits.
The clove industry on Zanzibar was largely wiped out by a hurricane in 1872. Today the plantations on Zanzibar are mainly for the tourist trade, but on nearby Pemba island the clove crop is still of great export value.


An island being composed by that many different cultures will of course have a very interesting cuisine. And it´s clear that the Zanzibar cuisine has had a lot of different influences over the years. A melting pot of african produce, asian love for potent spice mixtures and arab techniques.

Everywhere you go, the subtle perfumes lingering in the alleyways and backyards will reach you and hypnotize you. You just finished eating lunch, but funnily you feel hungry again… Garlic, ginger, chili, cardamom, curry, cinnamon, cloves. From kitchens and restaurants, a pot of boiling soup or an outside barbecue, so familiar but yet so exotic - there´s no escape from the magic scents that fills the air. As for green, red and white and black pepper, all come from the same pepper berry. Green pepper is the freshly picked berry. For red pepper, the berry is left on the vine for one or two more months, where they turn red. The berries stay red when dried.
And for white pepper? The red berries are picked, soaked in water and the outer husk is removed. As the berries dry, they turn white.
Black pepper is the still unripe green pepper berry, picked and given a quick boil in water, then dried. The outer green layer, shrinks and darkens.
Which pepper is the hottest? That would be the green pepper, according to our guide, followed by white, then black. Red is the mildest.

This spice, named after the French word “clou” for nail, comes from the flowering nail-shaped buds.
The tree matures after about 8 years, and after that it can be harvested twice a year for about 50 years.
Harvesting is done by hand by pickers climbing the trees, gathering the small buds in baskets made of coconut leaves.
The cloves are dried for three to four days on mats in the sun, the buds turn a dark brown color and the spice is ready for use or sale.


Cinnamon (Cinnamomum zeylanicum)
This very common spice widely used around the world is actually the bark of the cinnamon tree. It has a incredibly long history used as perfume, medicine and spice. This tree is indigenous to Sri Lanka and that´s also where the biggest cultivation of cinnamon is to be found these days.
After the rainy season the smaller shoots of the tree are stripped of their bark. These sheets of bark are then put overlapping to dry in the sun. As the bark dries it will automatically curl up in the form of a cinnamon stick. The sticks are then cut to the right size. The small pieces and flakes that falls of during the process is then ground into cinnamon powder.
The people of Zanzibar does not only use the bark though, the whole plant can be used for different purposes. The leaves can be used fresh or dried in cooking and tea. The stems can be burnt as incense to give the house a nice perfume and keep mosquitoes away. - is the seed of an evergreen tree native to the Molucca Islands. The tree produces 2 spices, both Nutmeg and mace, and grows up to 60 feet tall. Although the tree takes seven years to bear fruit, it may produce until the 90th year. Both spices come from the tree’s small yellow apple-like fruit(can be used to make jams), which splits into a red outer membrane, mace, and an inner brown seed, Nutmeg.
The spice has a wide variety of uses, apart from being used in sweet and savory cuisine around the world, the nutmeg oil also has some therapeutic uses.

Other spices present on Zanzibar are among others - ginger, turmeric, lemongrass, vanilla, annatto, cardamom, tamarind, menthol and ylang-ylang. 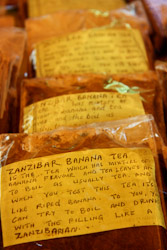 Wintertime is the time when I start craving a bit heavier food. Summer´s fruit salads and “must-have-ice-cream-now!” are long gone. Same goes for autumn´s pasta dishes with mushrooms and apple pies. Now I want the real thing. The sort of stuff that fills you with spicy comfort and keeps you warm through cold weather.

When the longing for foie gras got too strong I had fresh french foie gras flown in from Nice (Thank you M!) 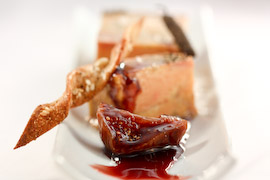 This spice, sold in whole pods, is, unlike it´s cousin green cardamom, an ugly bastard. On first sight quite a bit bigger and with a brown-blackish, wrinkled hard shell. One of it´s english nicknames “Bastard cardamom” is actually quite suiting when you compare appearance and flavor to it´s much more neat, elegant, subtle cousin, Mr Green.
Don´t let this fact frighten…
The black cardamom is not really a substitute for the green variety, but rather a spice of it´s own, with it´s own applications. It hails from the Himalayas and south China, but it is also grown in parts of Africa.

We´re talking about a unique scent, strong and overwhelming like something close to Tiger Balm. It releases a strong, varm smoky flavor, contributed to it´s drying over open fires. Combine this with earty tones, reminding of a thick forest in autumn, and you will be somewhat close.

The flavor that in it´s raw state is a concoction of strong mint-like tones, the sensation of volatile substances, with the fine smokiness (which reminds of tobacco and liquorice), a slight acidity and even hints of the green cardamom - while cooking it may take the sharp edge off and instead leave room for less pungent perfumes of cinnamon and newly cut tree.

Widely used in the indian cuisine, in rustic dishes and spicy mixes. It has an almost magical way of marrying withother spices and together bring forth new tones of sublime spicyness. It´s in fact hard to overdose.

Example of uses are tomato based soups and sauces, where it brings out the sweetness of the tomatoes. Of course also curries where it fits well in together with the many other spices.
Also used in rice, it gives a lovely smokiness.
Why not try it to make a spicy herbal tea?

It´s intimidating rough look may prevent some, less experimental cooks, from using it or even buying it. But my tip is - give it a go. There´s nothing to loose, who knows, maybe you´ll even find a new best friend in this bombastic spice.

"The art of dining well is no slight art, the pleasure not a slight pleasure."